Best Weekend Getaway from Indore – A day trip to Maheshwar 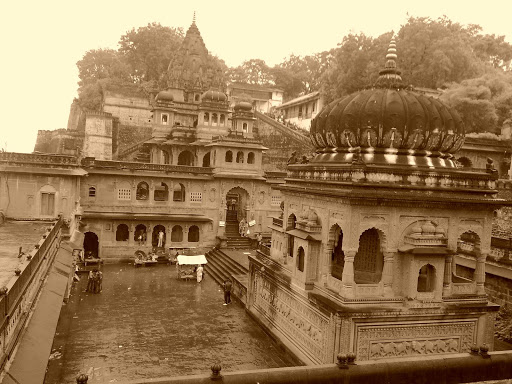 Lets Go for a Drive

Here are a few facts about me. I am a bachelor right now with no commitments, I stay in Indore where my company provides me with a gratifying bus ride every morning beginning 6.55 am ( it is a free massage for every muscle in the back which induces pain instead of reducing it). By the time we reach office it is made sure that we are well awake. Some brave ones still manage to sleep. I must not deviate as the bus ride alone can make me scribble endlessly. Bottom line is that it is easy on the pockets. Total distance per day is 80 kms and multiply it by 30. All in less than a grand for the entire month. You suddenly think that you have travelled back in time .

But still at the turn of the year I went ahead and bought a car. A blushing red i10 .What a luxury for a single man .Well this was a desire instead of a need if we have to throw some jargons here. That was to go on drives away from the daily chores but 8 months down the line that desire was still unfulfilled .The only drives which I had managed were from my home to my plant and back.

Always have a plan

The seeds were sown when one fine day we thought that we would go to Mandu. A very famous place in the vicinity of Indore and a drive of 2-3 hrs So we decided that we would go. The same evening we got together at Slounge, the only place which should be called a “pub” in Indore, and as it always happens we had too much fun. The next day we all ended up visiting Mandu in our dreams which got over somewhere around noon.

Some more days passed and Mandu did not happen.Finally three of us determined to execute the plan said that we would go somewhere,anywhere. It was 8th of August 2010 when I first took my i10 on a road less travelled.We had planned to leave early and started at 11.00 am on a Sunday morning which is quite early. The point was we only started. None of us knew where was the end point.The destination was not decided. So after a well mannered discussion in the car we hit the Khandwa Road. A much favoured destination of Indoris on a holiday. The weather was perfect. It had rained the previous night so it was cloudy with slight breeze. Apt to enjoy a drive through a meandering road amidst the green hills of Malwa. It was a pleasure to drive through a scene worthy of being captured. We did stop to take some pictures and had a great photo session. It is  amazing how the photographer in everyone comes out when one is surrounded with picturesque background. There are experiments with different angles and interesting poses.Nonetheless few  minutes were well spent and we had enough photos to fill a a good portion of our memory card.

Choral was the next stop. That was the initial end point as discussed. But it was a disappointment. Not that the place was bad but the occupancy rate was too high for our liking. It looked like a village haat when we reached so we moved on.

Maheshwar became the next destination.It was another 6o kms from where we stood at the time. Reaching Maheshwar was not tough, a straight and well maintained road takes you there. Maheshwar is known for the Holkar’s fort and Shiva temple which is there inside. The fort has been made on the banks of river Narmada which was flooded with water in monsoons. There were steamers who could take you on a ride through the river. Thanks to my phobia I stayed away from it. It was another opportunity to capture a beautiful place through the lens .We did that in huge numbers.

But for me it was not the fort which was memorable but it was a small Cafe where we had aloo sandwiches and aloo parathas. For once Aloo parathas had layers of aloo in it and were made of “shuddh desi ghee”. This will be the main reason why I would again go back to Maheshwar if at all. The taste was elusive and is not to be found in our urban dhabas. We returned back by 6 hoping to be back safely by 8.30pm. Indian railways had other ideas.Thanks to them we ended up getting stuck in a jam on the ghats.Tired and bored we stopped again at Choral and had some tea.

Back in Indore by 9.30 we rounded off the day at Chocolate Room for some comfort food.
.